ČD Cargo, a.s. owns equity share in 12 companies. In three of those, ČD Cargo is the 100% owner, whilst in others it disposes of majority or minority share. The amount of share in every company is determined by the company's historical development, capital intensity in relation to its establishment and operation and primarily the subject of business and its business strategy. The purpose of establishing those companies was mediation of services in freight transport in the neighbour countries, provision of logistic terminals, offer of complex logistic services and forwarding, or also for instance provision of clearing operations between the partners, so that ČD Cargo could concentrate mainly on its number one activity - operation of rail freight services. Three subsidiaries abroad represent an important business channel and extend significantly the opportunities of offering the ČD Cargo's services in the neighbour as well as in many other countries. 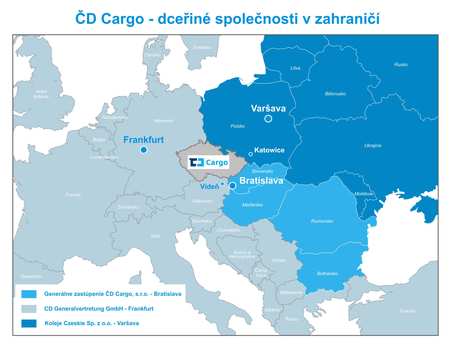 Your partner for transport in Poland and in the East direction

Catchment area: Poland, the Baltic republics, Belarus, Russia and Ukraine as long as the transport route across Poland is concerned.

Gate to transports to the East

The company was recorded in the Companies Register on September 24, 2008; ČD Cargo, a.s. has been the company's 100% owner since 2015. Until then the company had been on the market under the wings of Koleje Czeskie.