The Ceska Trebova operating unit was established on December 1, 2007. At the time of the establishment, it had seven subordinated operating sites; nowadays there are four of them, including a district extended by part of the former Olomouc OU. The operating workplaces had places of business in Ceska Trebova, Hradec Kralove, Letohrad (dismissed from March 1, 2009), Nachod (dismissed from March 1, 2009), Pardubice, Trutnov (dismissed from March 1, 2013), ad Tyniste nad Orlici. A significant change in the organizational structure brought the dismissal of the OU Olomouc, or better the division of its district into other operating units as of April 1, 2013. The Hanusovice and Zabreh na Morave operating workplaces were allocated to the Ceska Trebova operating unit. The first named workplace was however dismissed as early as of March 1, 2009, the second on January 1, 2014. The present district is thus really extensive and includes 1,306 km of tracks with 149 tariff points. 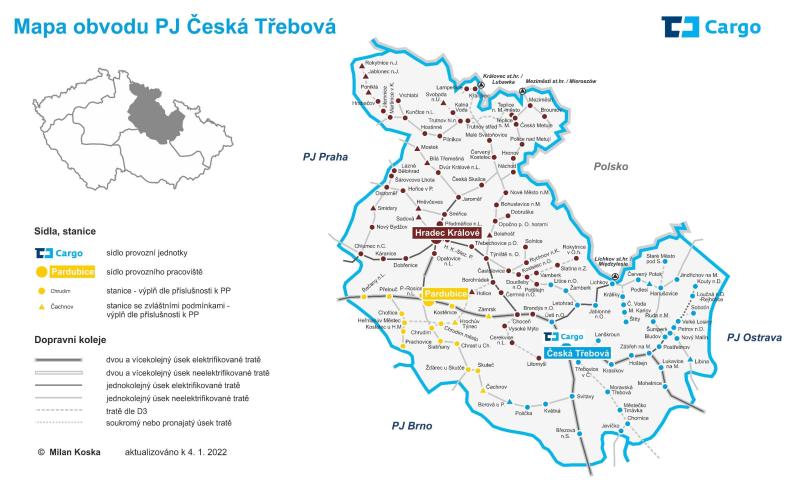 In the Ceska Trebova operating unit's district there is one of the four crucial classification stations on the SZDC network with daily outputs of about 700 shunter wagons. Ceska Trebova is, however, currently better known thanks to the new container transshipment of the operator METRANS. Even though they provide a part of the transportation via their own carrier, they are among the most important customers for whom CD Cargo provides increasingly large range of domestic and international shipments. Insignificant is not even another loading and unloading in the operating unit's district.

Major customers include power plants in Chvaletice, Opatovice nad Labem and Trutnov-Porici. Last year, we transported nearly 4.5 million tons of brown and black coal to their sidings. Equally important, however, is also unloading of graded coal implemented in a large number of tariff points. 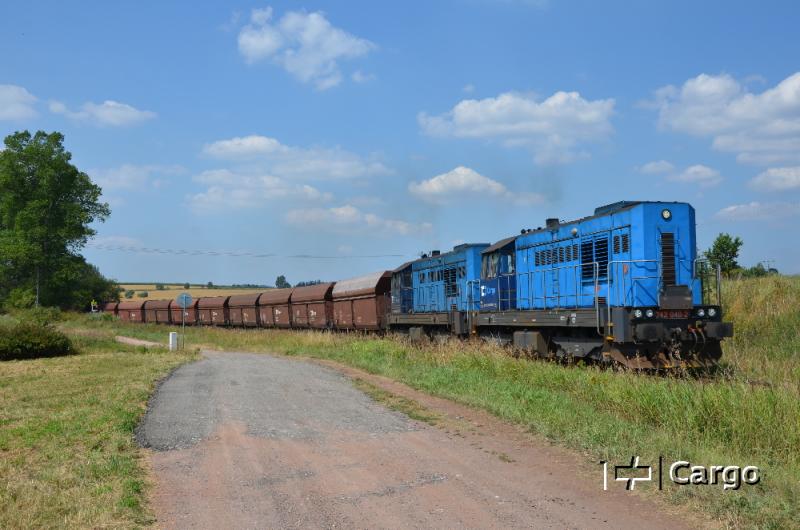 The situation is similar as concerns wood that was loaded on more than 17 thousand wagons last year in the district of the operating unit. The wood is loaded in all mountain areas - Jeseniky, Orlicke Mountains and the Giant Mountains. Not forgetting the transport of passenger cars from the factory in Kvasiny (station Solnice) that has been still growing. Major customers then include chemical plants in Pardubice, the Prachovice cement works or the lime kiln in Vitosov (Zabreh na Morave). The crossing in Lichkov is an entering point of integrated trains with fuel to the Czech Republic. Truly flawlessly executed transport operations are considered transports of table waters Toma from Teplice nad Metuji to Prague, or transporting welding material from Vamberk to Pardubice - Rosice nad Labem. 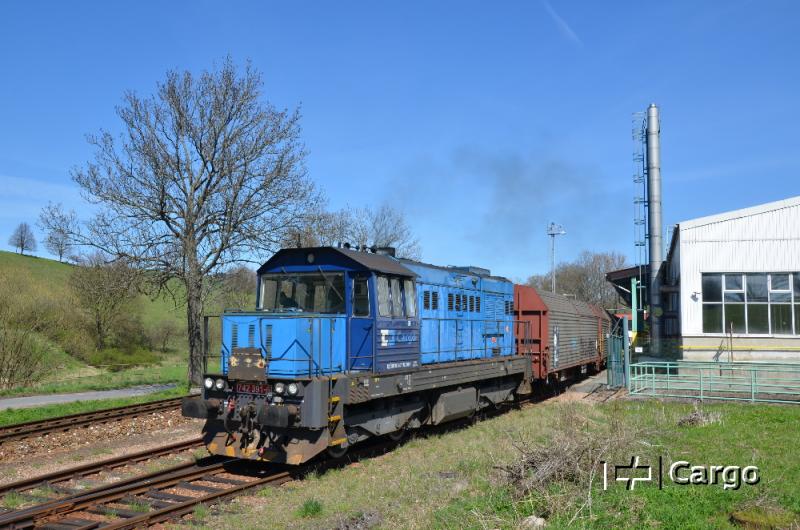 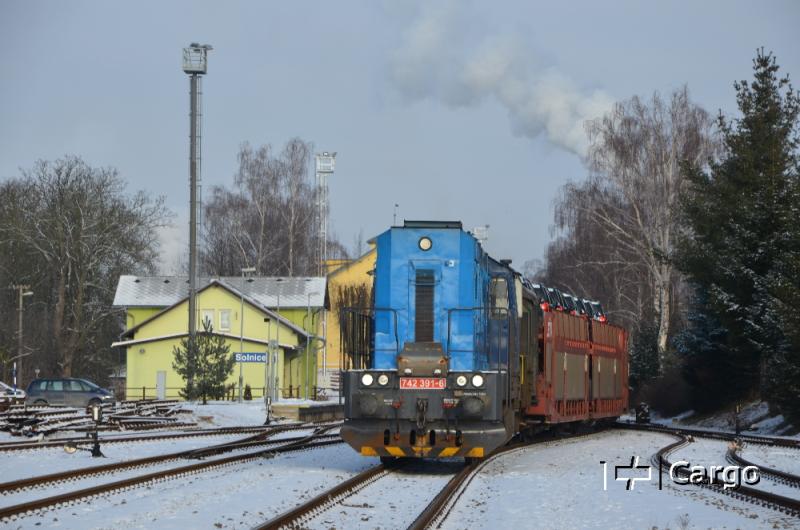 Three matters of interest about the Ceska Trebova operating unit

The railway network in the Ceska Trebova operating unit is in a total of four points interconnected to the railway network PKP PLK - in Kralovec, Mezimesti, Lichkov and Mikulovice. For a short while, the crossing point in Kralovec was revived by shipments of coal sludge from Wa?brzych to the power plant in Porici, otherwise it is not regularly used by cargo trains. A similar fate befell the neighbouring crossing point Mezimesti/Miersozow that can be since April 2013 to a limited extent passed only by freight trains, and that is almost not being used today. Much livelier is in the Lichkovsky saddle that is run through by an electrified line to Klodzko and further to the Polish inland. They are transports of mostly fuels, wood and other commodities. 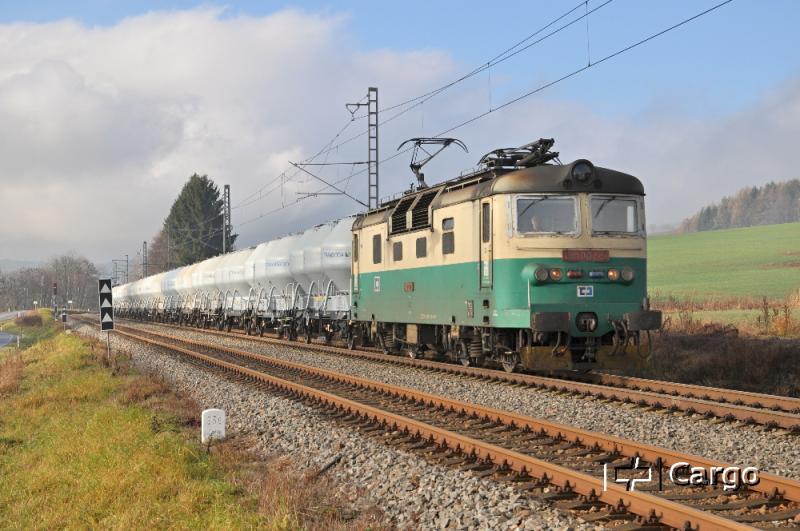 Particular matter of interest represents the border crossing Mikulovice/Głuchołazy. It's since 2009 without regular international freight transport, but since last year it has been used by peage cargo trains that continue from Jesenik along the dead center in the Polish station Głuchołazy back to the Czech territory and further to Krnov. Peage transport has been carried out there since the 1950's.

Diakonie Broumov is a civic association founded in 1993. Its primary mission is providing material assistance to people in need, regardless of the race, ethnicity, nationality, religion or political opinion. The cooperation with CD Cargo Diakonie Broumov is traditional. For many years we have been providing transports of selected clothing and other humanitarian items for that association. Of the approximately fifty stations in the Czech Republic, commodities are transported by rail to a sorting centre in Broumov. The stations with the strongest load include Prague Vrsovice, and Brno and Ostrava main stations. Other textile material is heading for Broumov from Slovakia. In 2015, we transported nearly 500 vehicles for Diakonie Broumov which represents about 4,500 tons of goods. Under the "Unneeded things to those needed" program, Diakonie Broumov organizes also collection of used textiles directly into railway wagons. 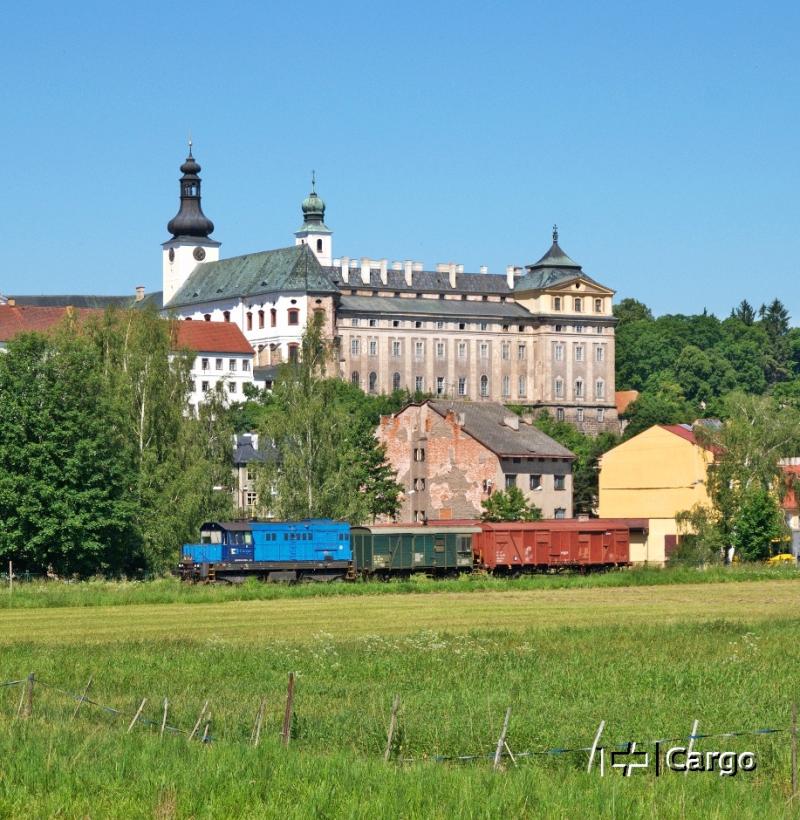 The Desna railroad is the marketing name for a regional railway lines from Sumperk to Kouty nad Desnou with a three-kilometre turning from Petrov nad Desnou to Sobotin. The section from Sumperk to Sobotin was built within an initiative of the Klein brothers - industrialists - and was opened as early as in October 1871. From Petrov nad Desnou to Kouty nad Desnou trains got moving by more than 30 years later, in November 1904. From the very beginning both lines, to a considerable extent, served to freight transport. In July 1997, the track was significantly damaged by the floods. The operation was only restored in May 1999 upon the initiative of the surrounding municipalities. The bundle of the Desna Valley municipalities is currently the owner of both tracks. The current operator of the passenger transport on the Desna railway is the carrier Arriva Moravia, even though in connection with the electrification of the track the carrier will change to the Czech Railways. The interruption of the operation due to the floods meant the diversion of most companies from the railroad; getting them back appears to be very difficult. Even so, the manipulation CD Cargo can still be seen there. Currently there are primarily transports of wood from the shipment points Sobotin and Kouty nad Desnou (over 300 wagons/year); the loading in other locations is, unfortunately, sporadic.