The Prague operating unit was established on December 1, 2007. At the time of the establishment, it had 7 subordinated sites (Benesov near Prague, Beroun, Kladno, Kralupy nad Vltavou, Prague - Liben, Prague - Uhrineves and Prague - Vrsovice). On March 1, 2009, the operating workplaces in Kladno and in Prague - Vrsovice were dismissed , and on January 1, 2013, also the operating workplace in Benesov near Prague.  On the contrary, since April 1, 2013, the district of the Prague operating unit has expanded by the district of the dismissed operating unit Nymburk, and presently reaches from Strezimir near Tabor in the south to Cernousy in the north of the republic, and includes 5 operating units (Beroun, Kolin, Mlada Boleslav, Nymburk and Prague-Liben). The Kralupy nad Vltavou and Prague-Uhrineves OU was dismissed as of December 31, 2015. The operating unit currently resides at the address of Ceskomoravska 316/24 in Prague-Liben. 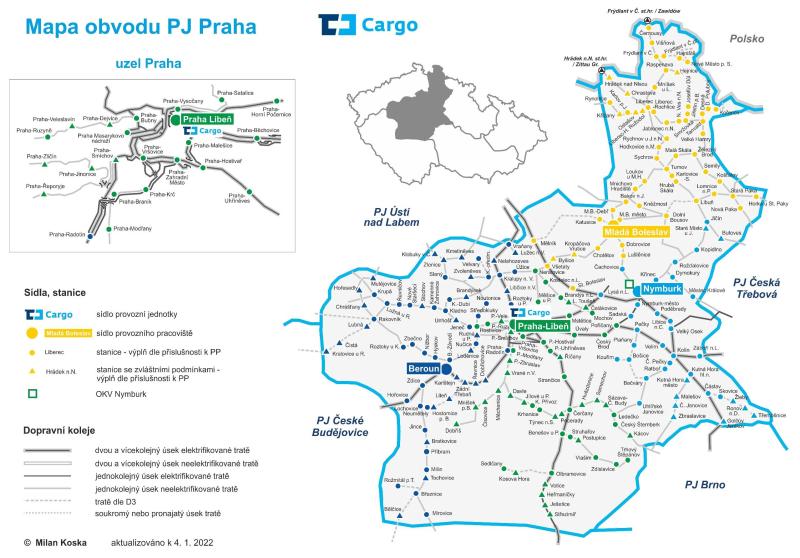 The Prague OU district contains almost 1,900 km of tracks, and services 230 tariff points.   The only regularly used transition border station is Fydlant In Bohemia. At the time of its establishment, the Prague PU had over a thousand employees; currently the number is roughly the same, but it has to be considered that two OUs were merged. Interestingly, the Prague OU is an operating unit with the highest number of diesel locomotives in operation.  There are 97 of them at the moment. 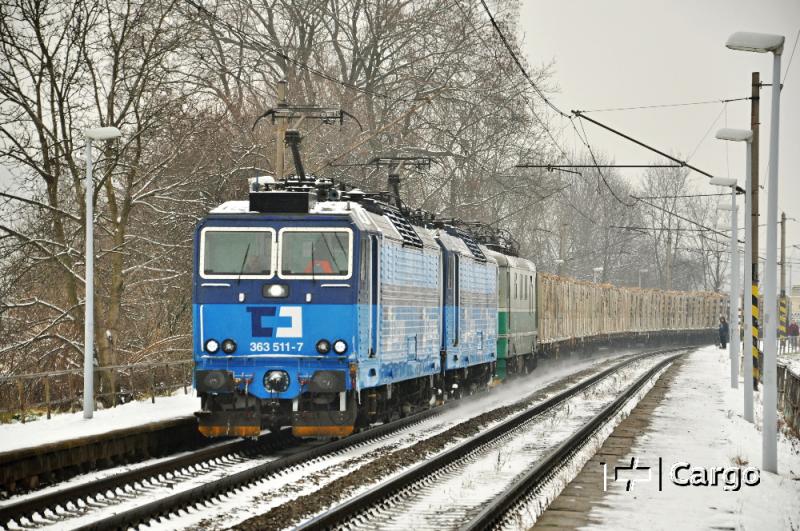 The portfolio of loaded and unloaded commodities is really diversified.  The most important customers are companies that operate in mining and processing of minerals (Ceskomoravsky cement, Vapenka Certovy Schody, Sklopisek Strelec), chemical companies (Ceska rafinerska, Spolana, Lucebni zavody Kolin), car factories (Skoda Mlada Boleslav, TPCA Kolin) and combined transport operators (Maersk, METRANS, Rail Cargo Operator – CSKD). The tradition of the metallurgical production in the Kladno region is nowadays followed by the Trinecke zelezarny (Trinec Iron and Steel Works) in Kladno-Dubi. Work mentioning are also customers like Procter & Gamble – Rakona producing washing powders, and a tyre manufacturer Mitas Praha. CD Cargo provides siding operations for both companies.  The district of the Prague OU is a place of registered offices of a number of companies dealing with buyout of scrap iron that is loaded in many stations of the main and regional tracks (yearly loading is about 500 thousand tons). Similarly, loading of wood reaches to 150 thousand tons per year, with the highest share in the stations Revnicov, Pribram and Nove Mesto pod Smrkem. Very interesting are transports of concrete prefabricates from the Goldbeck Skovice plant. Ceska posta (Czech Post) is a customer form whom we provide transport in just in time mode. Every day, three pairs of post wagons depart from the Prague-Malesice station and go to Ostrava. 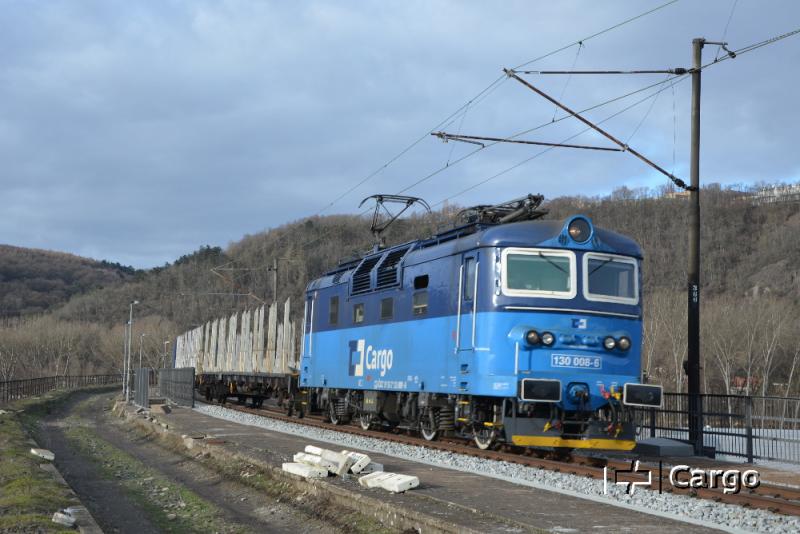 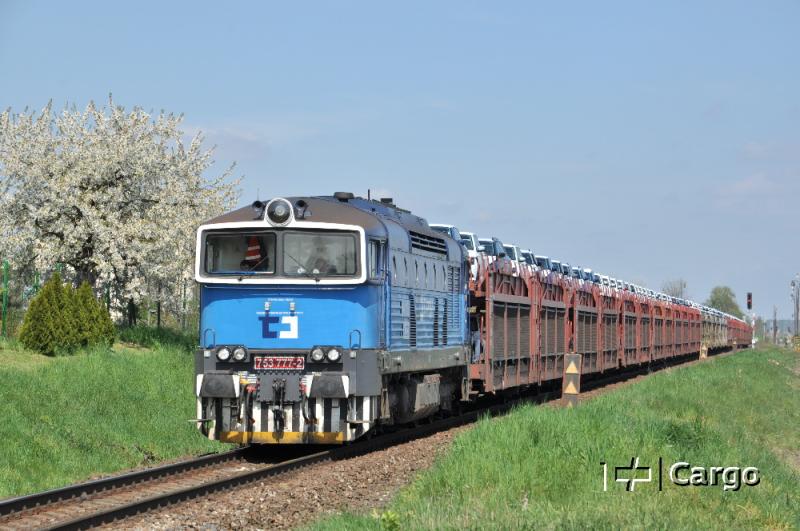 Three matters of interest about the Prague operating unit

The line from Tanvald to Korenov is the steepest track in the Czech Republic. Maximum steeps there achieve up to 58 per mille, hence the track was equipped with Abt rack. From the beginning of its operation in 1902, the track served mainly for cargo transport - for the import of black coal from Silesia to Bohemia, and for the import of glass and textile products in the opposite direction. Due to an intense passenger transport, the handling wagons of the CD Cargo carrier are only operated in the night hours, and just from spring to autumn.   In the direction to Korenov, wagons are shifted, hence the so-called "hytlak" (from the German "Hüttelwagen" or "service wagon" for freight train, is always placed at the head of the unit. Handling wagons are upstream loaded with glass sands to Desna and Dolni Polubne (sidings of Preciosa Ornela), and dolomite to Dolni Polubne for the same recipient. Wood is dominating in the opposite direction from Korenov and Desna. In 2015 we transported almost 16 tons of goods on the line from Tanvald to Korenov. 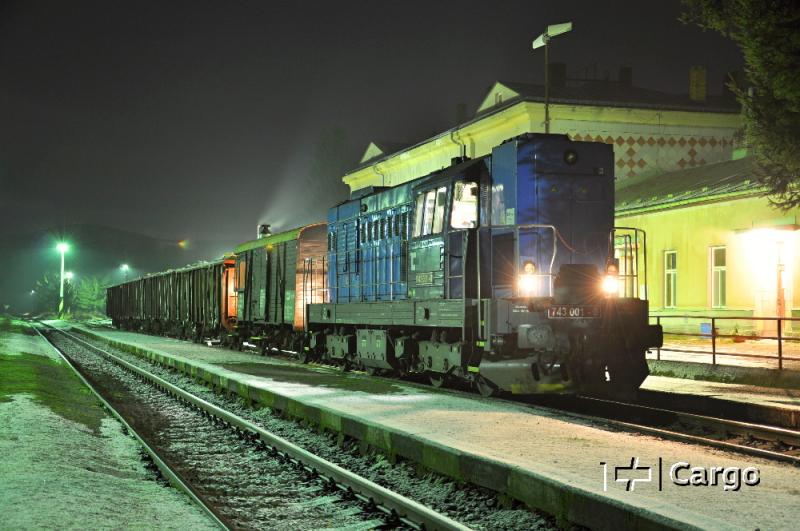 Kolin - statin with the highest number of sidings

Kolin is not only an important railway siding but also a station with great significance for freight transport (station number 534149). About 35 thousand wagons is loaded and unloaded there every year whilst 94% is loaded or unloaded on sidings. There is a total of 23 sidings branching from the Kolin station. Out of those 19 are active. Those most important ones include the sidings from the Kolin car factory TPCA, the logistic centre of Mi-King, or Lucebni zavody Kolin. When wagons for all siding operators get together, it is very complicated to plan servicing of the sidings.

The 3 km long siding to the Labe tranship point in Melnik was set up as early as in 1987. The then port yard consisted of three short handling rails.   Today, both the siding and the port get really busy, mostly due to the combined transport operators Maersk and Rail Cargo Operator – CSKD who reload containers going to Melnik not only from the North Sea ports but also from other domestic tranship points as well as from terminals in Slovakia or Hungary. There are about 48 integrated trains every week, and over 35 thousand loaded and unloaded wagons yearly. In connection with the new activities of the Rail Cargo Operator – CSKD - their number is about to increase significantly this year.